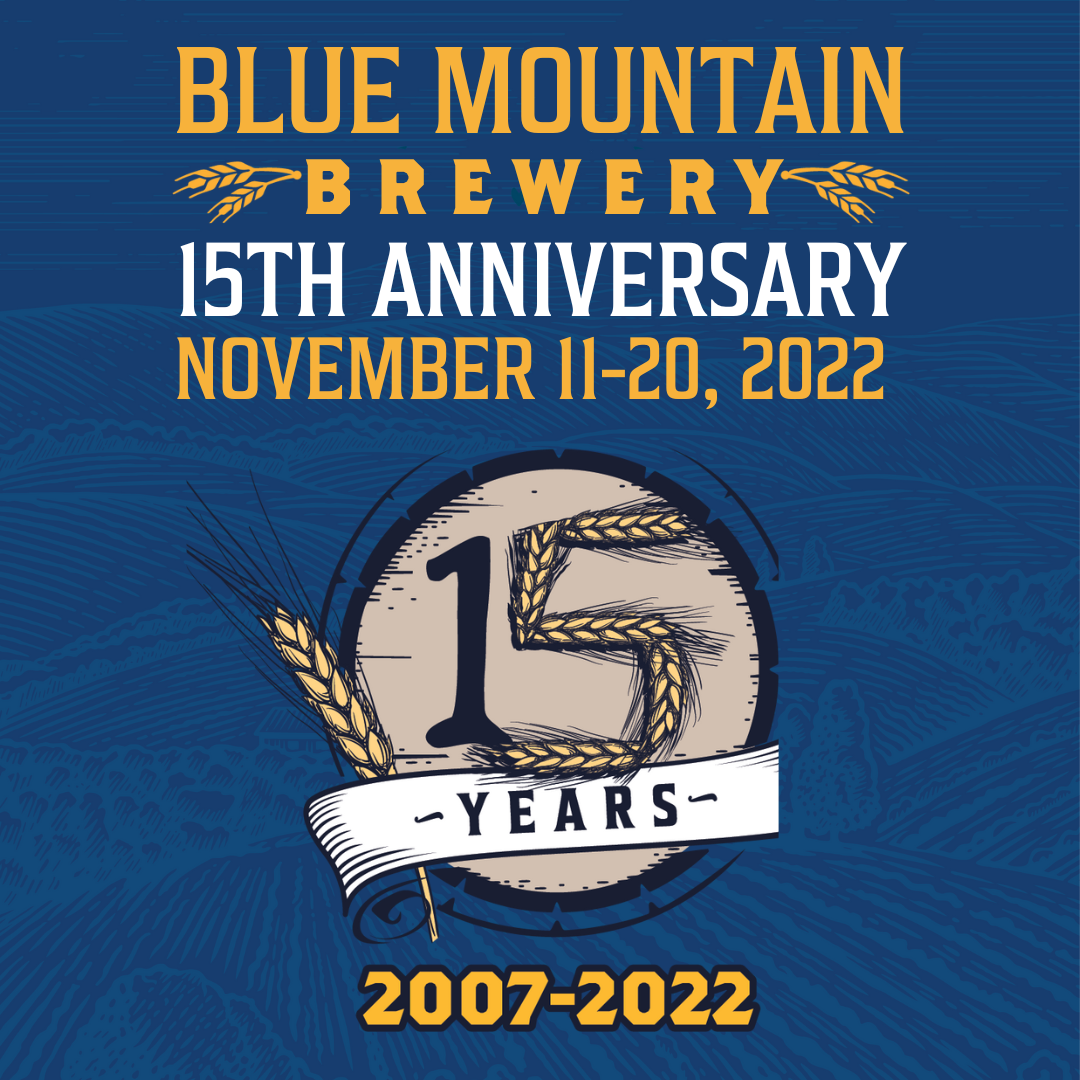 Blue Mountain is turning 15 this year!  Join us for our

Blue Mountain is turning 15 this year!

ANNIVERSARY BEERS:
(may only be purchased together in a 5-pack of 750ml bottles with anniversary glass for $79.99)

LOCAL SPECIES
A Belgian-inspired, barrel-aged, American-hopped, experimental sort of ale. A creation of deep-drawn well water, special barley malts, American hops, and Belgian yeast. Aged in charred American White Oak bourbon barrels. A beer as original and beautiful as our native Brookie. 6.6%ABV
MADRAS SOUR
A bold fruited sour brewed with oats, wheat, barley, orange peel, and coriander, then soured in the kettle with lactobacillus bacteria. This ale is gently hopped and fermented with a spicy Belgian yeast strain, then racked to French oak wine barrels from our neighbors at Michael Shaps Wineworks with a heavy helping of cranberry puree. After conditioning in the barrels, this meticulously crafted ale is tart yet balanced on the palate. 8% ABV
BLUE RESERVE
A global marriage of flavors – Belgian yeast, pale malts, mountain water, and American Cascade hops make for a simple beer with extraordinary flavor, worthy of our Reserve title. Enjoy the play between the spicy yeast and the citrusy hops in a bright golden beer that grows more complex with each sip.
THE ONLY BEER EVER to be made with all Virginia hops and medal at both the Great American Beer Festival (Silver, 2011, American-Belgo-style Ale) and the World Beer Cup (Silver, 2012, American-Belgo-style Ale). Our Reserve beer is brewed only a few times a decade. Please enjoy this very special taste of Blue Mountain.
SENSIBLE MOLE
Our very special Anniversary Barley Wine was brewed a year before the 15 year anniversary of Blue Mountain Brewery and the 10 year anniversary of Barrel House, and aged for most of that year in port barrels from local Green Hill Vineyards and also from Thatch Winery. The strong ale itself is brewed from a single-malt mash of Maris Otter barley malt and hopped exclusively with Styrian Golding hops. Rich, full, and decadent, this same batch of delicious ale will now be released annually on our anniversary, drawn from the barrels with each progressive year of aging in the port barrels in our special barrel room.
ADAMBEOR
Walk the dark path to a beer shrouded in the mists of a past time. Our Adambeor was brewed in the lost tradition of Dortmund Adambier–a dark, full-bodied, mildly smoky and sour ale in the old Germanic style that was always aged at least a year in barrels. Adambeor was created by brewmaster Taylor Smack to celebrate Blue Mountain’s 10-year anniversary. Only a portion of this brew has been released, with subsequent releases to be drawn from the barrels on the occasion of our 15 and 20 year anniversaries. The intricate label for this first release summons a dark mood of fall and decay, with re-arranged Old English text taken mostly from the uncredited poem known as “The Wanderer” from the Anglo-Saxon period in Britain (with assistance from Professor Peter Baker, University of Virginia). Enjoy this artfully crafted brew and step back in time with beer from days gone by.